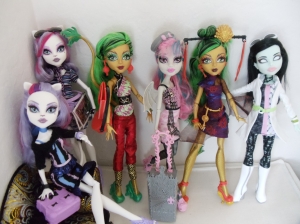 From curiosity, I have juxtaposed Mattel’s Designs for Monster High (2013-2014), presented here together for comparison across various popular and “updated” folkloric references:

(1.) Two examples of homage to a famous French actress-icon (Catherine Deneuve, who once posed as Marianne, the symbol of France, in 1985. http://www.ambafrance-us.org/spip.php?article619);

(2.) Two examples of the dragon from Chinese folklore depicted as a Monster High exchange student from China (as interpreted by a US toy company, Mattel) (www.cs.rutgers.edu/~mcgrew/remusleftovers/ipad/chinesemyt…);

(3.) One other European folk image, the gargoyle, as interpreted by Mattel as a Monster High exchange student from France [middle, in pink beret and Eiffel Tower print dress] (books.google.com/books?id=CcJL4lO2OaUC&pg=PA19&lp…);

(4.) Lastly, one Retro Mod, 1960s flashback-meets-ancient European harbinger of death: A go-go booted update to the sometimes bedraggled “banshee”* folk character from Irish and Scottish lore, as interpreted by Mattel as a Monster High student originally from Ireland.
(www.amazon.com/The-Banshee-Irish-Death-Messenger/dp/15709…; books.google.com/books?id=t8tKQcfn_QEC&pg=PA43&lp….)

[*”Banshee” comes from the Irish Gaelic words for “bean” (pronounced “ban”) = “woman,” plus “sí” (pronounced “shee”) = “fairy.” Or, spelled out properly: “Bean Sídhe.” So, “banshee” translates as “fairy woman.” Folk tales of this particular kind of “woman of the sí” relate events in which someone hears an unearthly woman’s wail, or sees a strange woman washing clothes, or both, events which are then followed by the death of a family member of the one who hears and/or sees the banshee. This provides the basis for Mattel’s backstory for teenage “daughter of the Banshee,” Scarah Screams, as she experiences social difficulties at school whenever anyone hears her voice.]

For further comparison, note the differences between this Dragon Fairy Princess (a.k.a., the Dragon God’s Daughter), as produced by China’s excellent doll manufacturer, Kurhn: 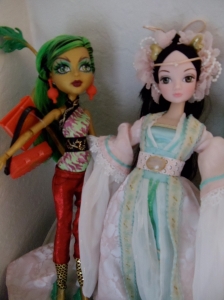 Mattel’s Interpretation of Chinese Dragon Imagery in the Character of Jinafire Long from Monster High. Again, I leave it to the viewer to decide whether Mattel “gets it right,” or not.

In looking at the different interpretations of an anthropomorphized dragon character above, we can see which details two different doll manufacturers choose to highlight in their characters. Mattel of El Segundo, California, USA, chooses a fashion fantasy approach, with a pastiche of different, and sometimes at odds, visual references that might be recognized from Western depictions of Chinese culture: Red lantern earrings, chopsticks as hairpins, Mandarin collar with diagonal closure on the blouse, tapered cropped pants [or] a cheongsam* with asymmetrical hemline, faux brocade trim with allusions to Chinese embroidery, green hair, scales, flames, tassels, gold metallic skin, lion-like tail ending in a green flourish, chrysanthemum hair decoration, red shoes with visual allusions to Chinese sculpture, and images of open fans. As has been noticed about the Monster High designs, there are many small details embedded in the the dolls, so I am only listing some of the most noticeable here about the two Jinafire Long dolls. Red lanterns, gilt or gold-painted statuary, brocades, chopsticks, fans, and chrysanthemums are all images familiar to Westerners who have either visited the Chinatowns of major US cities, have frequented perceived “old-fashioned” Chinese restaurants, or who have seen such images in Hollywood-produced materials. In her appearance, her flame motifs, her personality described on the back of the box and in her “journal,” and even in her name, Jinafire Long, evokes the fire-breathing dragons of European folklore, instead of the pacific, water-based dragons of Chinese folklore. (*http://en.wikipedia.org/wiki/Cheongsam).

Kurhn Toys Co., Ltd., of Foshan City, China, has used a similarly high level of detail in their fashion doll. The Dragon Fairy Princess or Daughter of the Dragon God, however, appears as a different kind of fantasy character, a regal one, as though she stepped out of a fantasy-adventure movie produced in China. She comes embellished in pastel layers, with a floor-length gown and inner and outer robes, long bell-shaped sleeves, sheer chiffon, gold lamé trim, ribbons, lace, faux pearl edging, satin slippers, long hair upswept in an elaborate style, a pink-tasseled bamboo flute, a thin gold crown with a pearl-like bead, and a set of gold fabric horns to indicate her position as an imperial creature. The pearls, floating chiffon, frothy shapes of her headdress, and preponderance of light blue signal that Dragon Fairy Princess is a denizen of the sea, as her Dragon God father rules there. Unlike Western dragons who breathe fire, she is cool, calm, and associated with water.

The faces of the two dolls, while both featuring a closed mouth and large, wide set eyes, also contrast in their details. Kurhn’s princess has brown eyes, dark brown hair, and a skin tone in keeping with her place of origin, while a bit on the pale side, which makes sense since her family lives under the sea. Aside from the two soft sculpture horns attached to her flowery, lacy headdress, the Kurhn fantasy princess is more humanoid in form than Mattel’s golden teenage dragon girl. Jinafire Long features large, wide-set eyes with, as one doll blogger (John Pickles, on Flickr, a.k.a. Pickles or Oak on Tumblr) points out, epicanthic eye folds. John Pickles notes in Aug. 2014 on one Flickr thread that Jinafire Long’s nose bridge seems a bit out of place in conjunction with her eyes. Overall, her round face, wide eyes, serpentine pupils, feathered brows, and bow mouth add up to a kittenish effect. (John Pickles’/Oak’s point is backed up on Wikipedia: http://en.wikipedia.org/wiki/Epicanthic_fold).

Kurhn does not bother with trying to make their character “recognizable” to potential customers outside of their normal distribution area, because their folkloric doll was never intended to go outside of Kurhn’s customer base in China. (This is why I have not been able, thus far, to ascertain this line’s year of production, as little is written about Kurhn in English and not everything on the company can be fed through translation software.) Kurhn hews to visual cues based on a popular interpretation of Chinese folklore, that, while not aiming for “authenticity,” does not have to add up to “recognizability” by Western-based viewers.

While there is much to recommend Mattel’s overall doll design, the elements of pastiche do not work well with some viewers. Yet, even if John Pickles/Oak has certain qualms about Mattel’s design choices with Jinafire Long (which would include the name; see below), he has still been using the doll for makeovers. This is the great strength of the Monster High line: the ease of remaking the doll to the owner’s specifications, allowing for a bit of learning curve with repainting or in applying new face decals (the latter of which are offered in the MH kits).

In the end, I leave the decision on the efficacy of Mattel’s folkloric and ethnic representations up to the viewer.

(By the way, John Pickles/Oak has some great notes on the culture clash details on Jinafire: http://oak23.tumblr.com/search/jinafire+long:

I have an issue with Jinafire being a chinese dragon and being a FIRE elemental, with having issues controlling her temperament, when Chinese dragons are known for being really calm and wise, and largely associated with the WATER element. This is easily found on Wikipedia and I have no idea why this aspect of her was so poorly researched.

As well as the fact her default outfit is yet another asian doll in a ‘modern’ cheongsam is very problematic even if Mattel didn’t intend to be racist, there is a lot of issues with her in terms of Asian representation and in doll lines in general.

Maybe she is half Phoenix? Its kinda annoying to have to stretch like that but maybe when they first created her character she was going to be a Phoenix but they changed it halfway through cause Dragons are more familiar.

thing is though, Jinafire has the perfect traits for a Western dragon with her fire affinity and all of her abilities/traits with a bit of Pan-Asian traits thrown in. So it kind of annoys me so badly to see that a quick bit of research for Eastern dragons so badly gone astray.

And even then if they intended her to be a Chinese Phoenix or a Fenghuang, there isn’t as much emphasis on *fire* for that mythology as so much about balance and union. Even though there are similarities between Eastern and Western Dragons/Phoenixes, their emphasised points are very different. If she was meant to be westernised due to being in a European/western country it could have been done through her fashion and aesthetic choices (much like Operetta with her rockabilly look, or Draculaura with her lolita/neo victorian slant)

So it bothers me a lot that for a doll line that puts a lot of effort and justifications for their design and character choices really dropped the ball on the mythology of a character and their background.